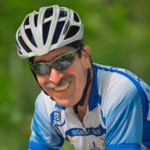 My AngelRide story began in 2014 when I came to the finish line at the Mystic YMCA to meet my friends Richard and Jennie Sullivan who were riding in their first AngelRide that year. I rode my bike to Mystic and as I got to the YMCA driveway, there was a whole group of people cheering for me. I was embarrassed since I had only ridden 10 miles to get there. Surely, I was not worthy of all this attention. I quickly admitted that I was just a spectator and I didn’t warrant the applause. They said, “That’s OK. We will still cheer for you”.

By the time Rich and Jenny came across the finish line to applause and their names being announced over the loudspeaker, I remember thinking “I want to be part of this”.

I signed up for the 2015 AngelRide even though I was not at all sure that I could ride 135 miles. When Memorial Day weekend arrived, I drove to the Mystic YMCA to meet the bus that would take riders up to the starting point in Norfolk. I remember sitting on that school bus during the >1 hour ride thinking, “How am I going to ride all the way back home?”

The next day we got to the starting point in Norfolk and everywhere you turned there was someone helping and supporting us get ready to ride. Little did I know that the same level of support and encouragement would be there throughout the entire event. At every rest stop, there were people cheering us on, ringing cowbells, feeding us, and offering whatever help we might need. Being
surrounded by such selfless and supportive people was truly inspirational and is an integral part of the AngelRide experience.

The format of AngelRide has changed over the years that I have participated but the one thing that has not changed is that AngelRide continues to be filled with some of the most giving and selfless people I have ever had the pleasure of interacting with. As another rider once told me, “I look forward to AngelRide every year. It re-charges my batteries”. Being able to participate in AngelRide each year, renews my faith in the “goodness” of people.