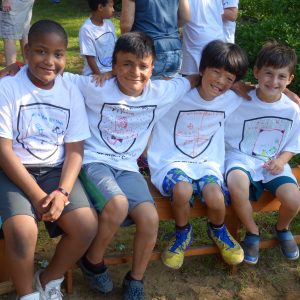 A different road brought each of us to AngelRide. Whether you were faced with the effects of cancer or knew someone who had been; whether you are a burn survivor or know someone who is, we join together as an AngelRide community to make a difference in children’s lives.

My journey began as a young child that suddenly went from a happy normal life and was thrown into the suffocating quicksand that is cancer. I spent three years in and out of hospitals across the country. I was constantly meeting with specialists and researchers all the while being bombarded with chemo, radiation, and a variety of chemicals that left me unrecognizable to those that had known me my entire life.

After going into remission adjusting to normal life was very difficult. With a delicate immune system, I was required to limit my exposure outdoors and often made to wear masks out in public. In the early 90’s school systems were unsure of what to do with me. At that time all their efforts to protect me and ensure my wellbeing unfortunately made me even more of an outcast. I was sinking into a very deep depression. Then I was invited to The Hole in the Wall Gang Camp. A summer camp specifically designed for children that had gone through the same nightmare that I had. A camp of peers. I was surrounded by children suffering the effects of prednisone and chemo. Children who had similar scars and trauma. We were also surrounded by smiling counselors that were there to help us remember happiness and joy and what it felt like not to be judged. Over the next few years I attended similar camps and each one had the same core values. Give children the childhood they almost didn’t have.

25 years later I came across a bike ride that gave back to the camp that had given me so much. I had to find a way to become part of this. Through the help of a coworker, who also was a long-time rider, I embarked on my first AngelRide in 2015. Arriving back at camp more than two decades later left me speechless as the emotions took hold. It still felt like home, the smells, the sounds, and most importantly the staff. All the joys came rushing back. Being able to see riders and volunteers experience that same feeling was incredible. Then in 2018 AngelRide announced that this was the final ride, much to the dismay of many that had become part of this massive family of friends.

Later that summer I was invited to join in a small group for a tour of a new camp and potential partnership for AngelRide, The Arthur C. Luf Children’s Burn Camp. Our group was met outside by Kathlene Gerrity, Executive Director of the CT Burns Care Foundation. She was very protective of this special place and all that it stood for. We soon saw the reasons why. As we met the volunteer camp staff, I came to realize that many of them were firemen and women, medical and emergency professionals, and former campers who were taking time from their already hectic lives to give even more of their time and of themselves. The dedication of this special group of people was simply astounding.

The Arthur C. Luf Children’s Burn Camp was not designed to treat the physical injuries so much as the injuries to the mind and the soul. You could see the impact on every smiling face, the sparkle in every eye. As we walked the campgrounds, I saw none of the luxuries that I had become so familiar with. There were no AC units. There were limited power supplies, but also there was a beautiful pond that was made for swimming and fishing. It was nature with no barriers. Each activity we came across was designed to not only bring absolute joy to the campers, but also help them rebuild their confidence. Simple games and crafts were being used to reteach muscle groups to preform tasks that we take for granted every day. Even more amazing was the fact that at each group of cabins was a campfire. This campfire was kept going and reminded the campers that fire and heat are not something to be feared. I was amazed and can only imagine the trepidation that some campers must go through when first encountering this.

During our lunch I was able to sit down and talk to several campers and although we were informed not to ask about their past, no restrictions were put to the campers. Being able to speak openly to strangers is a huge step. I was once again struck by the strength of these children and their willpower to keep moving forward. I also came to realize that just as Hole in the Wall Gang Camp changed the lives of all who attended or were blessed to work there and experience camp, so did the Arthur C. Luf Children’s Burn Camp. Each visit will at first, for a very brief instance, leave each of us in shock and most likely tears. However, that will only last for the blink of an eye. As you will soon be overwhelmed with the love and compassion that emanates from the campers and staff. Your vision is flooded with children laughing and playing. Your heart is healed. The shock is gone. You suddenly feel like a kid again and want only to go to camp and play.